A Max by Any Other Name Would Smell

“A rose by any other name would smell as sweet” is a popular reference to William Shakespeare’s play Romeo and Juliet. This formulation is, however, a paraphrase of Shakespeare’s actual language. What Juliet actually says in her famous speech in Act II, Scene II of the play is:

What’s in a name? That which we call a rose
By any other name would smell as sweet […]

My given name is Clive. My nickname “Max” (the name of almost every dog and every robot in every science fiction film) derives from my family name of “Maxfield.”

Many of my family members end up with the Max moniker or a derivation thereof. My dad’s family and friends used to call him Max or Maxie. His sister, Barbara, was also called Max or Maxie by the family and her friends, and so it goes.

As you can imagine, this made for somewhat convoluted after-dinner conversations at parties and family events. If someone said, “Max said…,” and someone else replied, “But Max said…,” then it would be obvious to the rest of the family that the first Max was my dad because that’s the sort of thing he would have said, while the second Max had to be my aunt because that’s the way in which she would have replied. By comparison, to anyone outside the family, it sounded like I had a schizophrenic uncle with multiple personalities who spent all day talking to himself (but Max doesn’t like to talk about him).

The actual definition of the term “nickname” is interesting because there are two flavors: (a) a usually descriptive name given instead of or in addition to the one belonging to a person, place, or thing, and (b) a familiar form of a proper name (as of a person or a city).

Nicknames can be a funny old thing. When I was a young man, for example, I had a friend whose nickname was Shears. His real name was Mark Burkinshaw. From a young age his friends started to call him Billy Burkinshaw, which they later truncated to just Billy. The Beatles released Sgt. Pepper’s Lonely Hearts Club Band in May 1967 when Mark and I were both 10 years old. The name Billy Shears, which was an alias for Ringo Starr, was used as the announcement/segue for the second song on the album, With a Little Help From My Friends, at which point Mark’s friends transitioned to calling him Billy Shears, before eventually dropping the Billy and leaving only the Shears (my dad used to call him Scissors because of his long hair, by which I mean Shears was the one who had the long hair, not my dad).

Have you ever wondered why Billy and Bill are common nicknames for William? This is one of the things you sort of take for granted until you stop to think about it. In fact, the name William first became popular in the English language following the Norman conquest of England in 1066 by William the Conqueror (the Normans were descended from Vikings who invaded northwestern France in the 10th and 11th centuries). Shortened versions in English include Will and Willy (or Willie), which rhyme with Bill and Billy, so “there you go” as Toula’s father is fond of saying in My Big Fat Greek Wedding.

This sort of reminds me of Cockney rhyming slang, which was first used in the early 19th century in the East End of London (to be an official “Cockney” you have to be born within earshot of Bow Bells, which are the bells installed in the historic St Mary-le-Bow church). As per the Wikipedia:

The construction of rhyming slang involves replacing a common word with a phrase of two or more words, the last of which rhymes with the original word; then, in almost all cases, omitting, from the end of the phrase, the secondary rhyming word (which is thereafter implied), making the origin and meaning of the phrase elusive to listeners not in the know.

Well, that makes things simple, doesn’t it? The funny thing is that I’ve never lived in London, but — like most people from England — I understand many of the basics. For example, “porkies” is Cockney rhyming slang for lies (“Lies” -> “Pork Pies” -> “Porkies”). 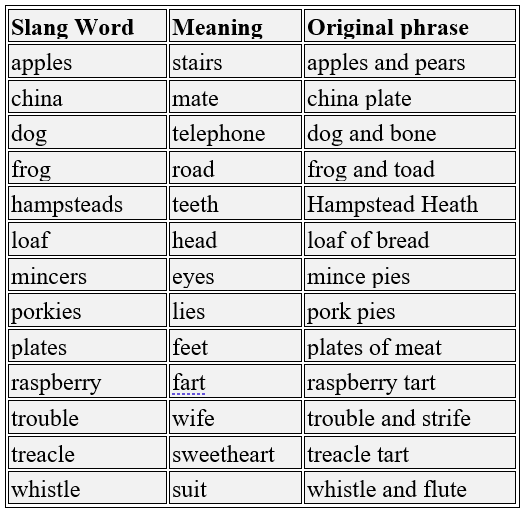 I guess we (humans) just like rhyming things in general although — now that I come to think about things — I’m basing this assumption on my knowledge of English. I have a very limited understanding of other languages, so I’d be interested to hear if this is something that’s commonly done in other tongues.

This practice of rhyming explains a lot of other seemingly meaningless nickname relationships. For example, Richard can be shortened to Rick or Ricky, whose rhyming counterparts are Dick and Dicky, which goes some way to explain why so many Richards we meet are Dicks, if you see what I mean. Similarly, Robert can be shortened to Rob, which rhymes with Bob.

My mom’s given name is Margaret, which lends itself to being morphed into Meggy (or Meggie) and Meg, which can subsequently be transposed into Peggy and Peg, respectively. Another nickname for Margaret is Daisy, which may at first appear to be coming out of left field until we discover that Margaret stems from the French name Marguerite, which — by some strange quirk of fate — also happens to be the name of a type of daisy.

As an aside, the phrase “out of left field” (as used in the preceding paragraph) is American slang meaning “unexpected,” “odd,” or “strange.” Originating from baseball terminology, this refers to a play in which the ball is thrown from the area covered by the left fielder to either home plate or first base, thereby surprising the runner.

I fear I’m poised to wander off into the weeds (I can only imagine your surprise), so let me close this blog by asking if you know of any other interesting nicknames and their origins and derivations. That “boing” sound you hear is the metaphorical ball landing on your side of the metaphorical court. Saying this inevitably reminds me of the Boing Boing website, which describes itself as “A Directory of Mostly Wonderful Things” (I feel another wave of waffle rising… But no! I must go!)

A deeper mystery is how Ted became a nickname for Edward…

I know this one — in fact there are two common nicknames for Edward — Ted and Ned. The first comes from shortening Edward to Ed (both of which start with a vowel) and then adding the easy-to-pronounce consonant ‘T’, resulting in Ed becoming Ted. The second comes from people affectionately saying “mine Ed” which transformed into “my Ned” which ended up as Ned.

I have a friend who is a mechanic. His initials are M. D.
Everyone calls him Doc.

Occasionally while playing golf with people I don’t know, I will be called Chuck. I politely say, “Please don’t call me Chuck, I have killed people for less than that.”

I’ve heard several explanations why people use Chuck and a nickname for people called Charles — the most common explanation is that name Charles in Middle English (circa 1150–1500) was Chukken, which leads to Chuck. But I also found a more convoluted explanation here: https://people.howstuffworks.com/why-is-chuck-short-for-charles-and-dick-short-for-richard.htm

Yes, it appears that the origination of the nickname Chuck is unclear, wish it would all disappear. Maybe that is the case in one or more of the multiverses.

It’s probably no longer relevant, but in times past in my father’s days in the UK army, anyone with my surname James would be Jimmy (or occasionally Jesse); also you would have Dusty Miller, Shorty Longbottom, and Taffy for anyone Welsh. And others that I’ve forgotten…

In WWI the name “Tommy Atkins” was used on forms as an example for the often uneducated soldiers — hence the fact that the Germans (and others) used the name “Tommies” for English Soldiers — but the history of this name goes back a couple of hundred years: https://en.wikipedia.org/wiki/Tommy_Atkins

Nicknames can be given for favoured clothing or physical anomalies.
I knew a guy who was nicknamed “Vellies” because he always wore veldskoen ( a quintessential South African shoe)

And the guy named “Lefty” because he had lost his right hand.

which reminds of a question that my brother used to pose: what was Captain Hook’s name before he lost his hand to the crocodile?

“What was Captain Hook’s name before he lost his hand to the crocodile?”

My dad frequently told me to use my loaf. I asked him what he meant, and he said “Use hour head… for more than a hat rack!” But he never gave me the connection Loaf – loaf of bread – head….

And at school we used to refer to a friend as “My china” but I just accepted it the way schoolboys do when they are trying to fit in. Only much later did I realise it was rhyming slang. A Chinese guy I met said that it’s used in the same way IN China, but he wasn’t sure why…

And I also learned the alternative meaning for raspberry at a young age, without realising where it came from. I wonder if we can start referring to the “Fart’Pi”??

Now you mention it, I remember from a young age heearing older folks say things like “hello my old china” and I gradually understood it to mean “mate” by the way you usually pick things up as a kid — it was only later I discovered the Cockney Connection, as it were.

Clive is my given name, but everyone outside of my family calls me Max (from my family name Maxfield 🙂

I have many nicknames for my kids, usually generated spontaneously due to circumstances. Those tend to be unprintable…

But, other nicknames for them are OK:

#1 = Einstein, #2 = Zweistein, #3 = Dreistein, #4 = Vierstein. Took them awhile to understand both the sarcasm (thinking I was calling them brilliant, but not really) and the foreign numbers. When they got it I knew they were becoming interesting.

#3 has beautiful red hair, so of course she was Pumpkin, which morphed to Pumpkin Pie, which became Miss Pie. She calls me Mr. Daddy in response.

#4 is my Kmart Blue Light Special as she is adopted and wasn’t cheap. First time I called her that she said “Daddy, what’s a Kmart?” (shut up kid!)

My father’s name was Howard but one of his brothers always called him Hank. I thought that was short for Henry, so I asked my uncle about it and he said my dad “looked like a Hank.” ‘Nuff said.

I’m fortunate that my kids tend to use the nickname “Dad” for me, at least within my earshot. Most of the other nicknames they have for me can at times be quite creative — if I’ve trained them well.

Olde schtick by a Comedian Who Shall Not Be Named explaining that as a child he thought his name was Jesus Christ, and his brother’s name was Dammit, because that is what their father started most conversations with. “Jesus Christ, what did you do?” “Dammit, what were you thinking?”

One of the more clever ones for myself, bestowed upon me by a secretly very intelligent coworker, is TomBurkeulosis. Still my favorite.

And, finally, a different coworker, also stealthily intelligent (he was from Mississippi), took all of 5 seconds to nickname my first born, Seamus, as CMOS. Well played, sir!

Just Call Me A Woodworking Fool

The Sound of Drums

Feel the Rush of a CLEAVE Keyboard