Solderless breadboards are useful for implementing small circuits and prototypes. Here are some tips and tricks that can make things even better.

There’s a tendency for people who already know something to assume that everyone else knows the same thing. Sometimes they think to themselves, “this bit is obvious,” but oftentimes it isn’t.

Take solderless breadboards, for example. I have a friend whose son is a first-year student at university studying electrical engineering. He’s trying to get ahead of the game by teaching himself stuff with the Arduino, but he was having problems getting his first experiment to work so he asked me to take a look.

It turned out his circuit was wired incorrectly. The underlying problem is that he didn’t fully understand how his solderless breadboard worked. I’ve run into this sort of thing with other people, so I thought I’d write this column to explicate and elucidate (don’t worry, I’m a professional).

Let’s start with the term “breadboard” itself. This moniker came about deep in the mists of time (before the 1970s) when people didn’t have access to all the cool stuff we have today. To create electrical circuits, even professional engineers would often hammer nails into a piece of wood and connect everything together by wrapping their wires around these nails and then applying solder. It wasn’t unknown for younger hobbyists to snaffle their mothers’ breadboards for this purpose (literally, wooden boards upon which loaves of bread were sliced), which led to their constructions being known as “breadboards.”

This explains why we usually start any conversation on this topic by saying “solderless breadboards” to make sure we’re all talking about the same thing, and then drop the “solderless” qualifier and simply say breadboards thereafter.

Breadboards come in many shapes and sizes, but two of the more common are known as “half-size” and “full-size.” The small holes are often called “tie points.” I’m assuming this is because they can be used to tie (connect) things together. Under each hole is a little metal clip. When we push a conducting wire or component lead into a hole, its metal clip will grab it and hold on.

If we were to peel the top off the board, we would see that groups of these clips are connected with metal strips (in reality, each group of clips and their associated strip are formed from the same piece of metal).

In most breadboards, the power and ground rails run all the way across the board. In some cases, however, the rails are disconnected in the middle. These “split-rail” boards make it easier to work with circuits that require a mix of power supplies, like 5V and 3.3V, for example. The fact that the board has split power rails should be indicated by a corresponding break in the red and blue lines, but this isn’t always the case. Also, even if the red and blue lines are broken, this is easy to miss if you aren’t paying attention, which can result in your circuit working (or not working) in interesting and unexpected ways (I speak from experience).

VERY IMPORTANT! Purchasing a breadboard is one occasion when you really don’t want to cut corners by buying the cheapest offering you can find on eBay. The problem with “cheap and cheerful” breadboards is that their conducting strips and clips may be formed using low-quality metal that—over time—stops properly gripping the wires and component leads you push into the holes. This can become so bad that your components fall out if you turn the breadboard upside down. You can also end up with dreaded “intermittent faults” that come and go when you move the breadboard.

Step 1: Connect the Arduino: When we build a circuit on a breadboard, we’re going to need some way to power it. There are lots of alternatives. For the purpose of these discussions, however, we will assume that we are using an Arduino Uno to power a full-size breadboard. We will also assume that we wish to power the breadboard from the Arduino’s 5V supply.

Take a look at the layout shown in the illustration above. It’s a good idea to get into the habit of always orienting the breadboard so that the power rail (red line, +ve) is on the top; that is, the furthest away from you. If the truth be told, it really doesn’t matter which rail you choose so long as you are consistent. Doing things the same way each time (a) helps prevent you from making errors in the first place and (b) makes it easier to track down problems later. The reason I opt to have a power rail on the top and a ground rail on the bottom is that this matches the way in which we typically draw our circuit diagrams.

This is also a good time to note that it’s a really, really good idea for you to pick a color scheme for your wiring and then stick to it. For example, I use red wires for power and black (and/or green) wires for ground. If I’m using a mix of 5V and 3.3V power supplies (possibly with a split-rail breadboard) then I use red wires for 5V and blue wires for 3.3V. This may seem like an obvious point, but you’d be amazed how tempting it can be to use whatever wire comes to hand in the heat of the moment. Sticking to a defined scheme makes it easier to understand and debug your circuits should problems arise later.

The reason for doing this at the far end from where we connect the power is that—when we start plugging things in—it helps verify the integrity of the rails.

There are a couple of things to note here. First, even if you are using a 5V supply on one half of the power rail and a 3.3V supply on the other half, you will still want to connect the two halves of the ground rail together (unless you wish to have separate analog and digital grounds, for example). Second, even if you don’t have a split-rail board, it’s good to get into the habit of connecting the two halves “just in case” (again, I speak from experience).

Step 4: Add a couple of header pins for debug purposes: At this point, it’s a good idea to add a couple of header pins to the power and ground rails. This step is optional, but it’s another advantageous habit to adopt. Given a choice, it’s preferable to use header pins that have long leads on both sides. Later, if we need to debug the board using a multimeter (or perhaps an oscilloscope or logic analyzer), having these pins already available makes our lives easier.

Note that if we have a split rail board and we are using multiple power supplies, then we would want to add header pins on both sides of the split rails.

Step 5: Add a LED if you’ve got one handy: This is another optional step that offers some advantages. The idea is that, if you happen to have a spare LED lying around, then it doesn’t hurt to add it to your breadboard along with an appropriate current-limiting resistor.

There are two big advantages to this. First, when you power-up your Arduino (either via its USB or power jack), the fact that the LED lights up shows that everything is as it should be, including the fact that your power rails and associated jumper wires are intact (you’d be amazed how often the cause for a non-functioning circuit turns out to be something as silly as a broken jumper wire). The second advantage is that you already have a LED lit up—which looks good and cannot fail to make you happy—and you haven’t even started building your circuit yet!

Of course, you should remove power from the Arduino before you start to build your main circuit, but you can do so confident in the knowledge that everything is now ready to rock and roll.

In the case of the green LED shown in the image above, I’m assuming this device’s forward voltage drop is specified as 3V and its forward current is specified as 20mA. Since we are also assuming a 5V supply, this means we need to use a 100Ω resistor (hence the resistor’s brown-black-brown color bands in the image).

PREVIOUSNEXT
What Does Your Daddy Do?One International Adapter to Rule Them All!
LOGIN / REGISTER
EDIT PROFILE

Nice intro Max. And nice graphics as always.
One of the handiest things you can do is to build a breadboard into a case with various power supplies (i usually aim for +5 and +/- 12V for starters) and maybe a speaker, LED(s) and maybe a source of pulses – either from a crystal oscillator or just from the mains frequency – tap off on the low voltage side after your rectifier and before your smoothing cap, and you’ll have a source of 120 or 60 Hz pulse. Square them up and divide them down to 1 Hz or so and they are very useful. A mini-oscilloscope would be good too, you can get small modules or make one with an Arduino and while not pro grade they are good for a quick look at a waveform.

While you can use 4mm banana sockets for your connections there are better ways to do it. You can use speaker connectors or screwless terminals like the ones shown (hope the pics get through) which make it really easy to work with breadboarding wires. 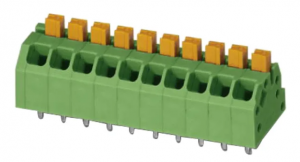 Here’s the other pic: 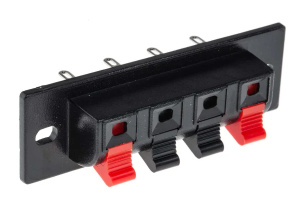 What Are Voltage, Current, and Resistance?

Are You a Microsoft Guru?

One International Adapter to Rule Them All!

What Does Your Daddy Do?

What’s It All About, Alfie?

It’s Time to Look at Jupiter!