Once Every 50,000 Year Comet is Heading Our Way

Are there any events from the past that you would love to see if you were ever presented with an opportunity to do so?

My chum Jay Dowling spends a lot of time meandering his way around the offerings on the Phys.org website.

Jay just sent me a link to a recent column that sparked his interest: Once in 50,000-Year Comet May Be Visible to the Naked Eye. This comet, which is known as C/2022 E3 (ZTF), is about a kilometer in diameter. Thought to originate in the Oort Cloud, it will come closest to the sun today as I pen these words (12 January 2023), and it will pass closest to the Earth in 20 days’ time on 1 February 2023.

Perusing this article set many thoughts bouncing around my poor old noggin. First, I was reminded of the book Heart of the Comet by Gregory Benford and David Brin. A brief synopsis from the Wikipedia is as follows:

The novel tells the story of an expedition beginning in the year 2061 to capture Halley’s Comet into a short period orbit so that its resources can be mined. The discovery of life on the comet and the subsequent survival struggle against the indigenous lifeforms and the illnesses and infections they cause leads to a breakdown of the expedition crew and the creation of factions based around political beliefs, nationality and genetic differences between the “percells”—genetically enhanced humans—and the “orthos”—unmodified humans.

As well as the fighting between these factions, Earth rejects the mission due to fear of contamination from the halleyform life and attempts to destroy the comet and those living upon it. Eventually the mission crew on Halley are forced to accept that they can never return to earth and create a new biosphere within the comet’s core and in some cases evolve into symbiotic organisms with the halleyform life.

Next, I started to think about the book Lucifer’s Hammer by Larry Niven and Jerry Pournelle. This too features a comet that originates in the Oort Cloud. Originally it is expected that “The Hammer,” as it is dubbed by the media, will miss the Earth, but as we read in the Wikipedia:

The comet’s nucleus breaks apart and the pieces strike parts of Europe, Africa, the Gulf of Mexico, and the Pacific and Atlantic Oceans. These result in volcanic eruptions, earthquakes, and tsunamis, destroying major coastal cities around the world, killing billions and initiating a new ice age because of the massive quantities of water and debris flung into the atmosphere.

Immediately after the strike, China, anticipating that the Soviet Union will become too cold for its people and must therefore invade its neighbor, launches a preemptive nuclear attack on its neighbor. The Soviets retaliate with their own nuclear missiles, reassuring the US that it is not the target.

Suffice it to say that things start to go downhill from this point on. Both of the aforementioned books are well worth a read. In fact, I think I shall go back and re-read them myself, but we digress…

If comet C/2022 E3 (ZTF) is visible to the naked eye today with all our light pollution, then it would probably have been visible to members of the early modern human (EMH) (a.k.a. anatomically modern human (AMH)) and Neanderthal communities when it was last in our neighborhood 50,000 years ago.

I don’t know about you, but this really causes me to stop for a moment to wonder if one of my ancient ancestors, let’s call him Ugg Maxfield, paused whatever he was doing (inventing the wheel, I have no doubt) to look up at the sky and think lofty thoughts. In reality, knowing the Maxfield clan as I do, he probably thought something prosaic along the lines of, “That’s strange, that wasn’t there yesterday.”

Coincidentally, 50,000 years ago (give or take) is when Meteor Crater was formed in the desert of northern Arizona. At that time, the local climate on the Colorado Plateau was much cooler and damper than it is today. In fact, the area was an open grassland dotted with woodlands inhabited by mammoths and giant ground sloths. 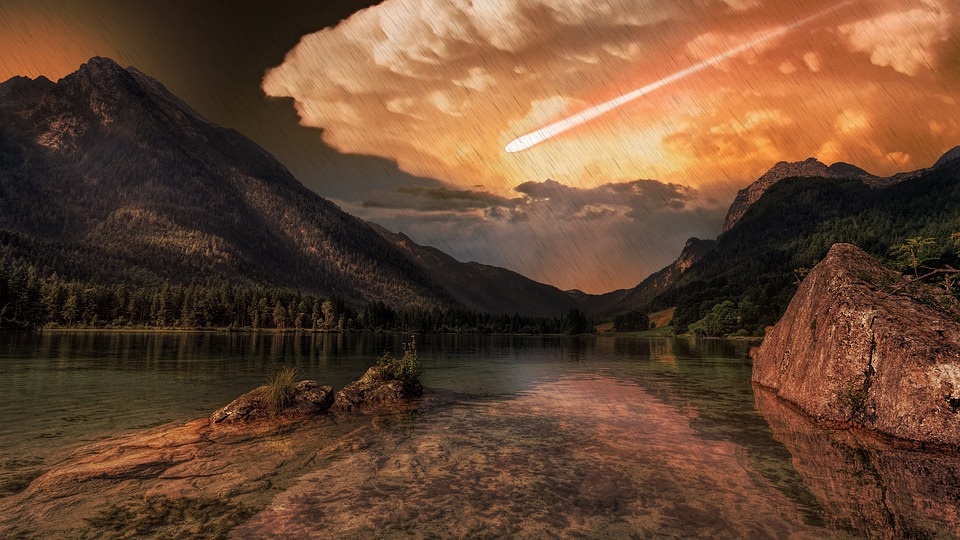 The object that excavated the crater was a nickel-iron meteorite about 160 ft (50 m) across. About half of the impactor’s bulk is believed to have been vaporized during its descent through the atmosphere, and its impact energy has been estimated at about 10 megatons of TNT. Suffice it to say that anyone in the vicinity ended up having a real bad hair day.

If I can ever get my time machine working (you simply can’t find the parts where I live), watching the creation of Meteor Crater (from a safe distance) is one of the items on my bucket list. I’d also like to go back and see the river that filled the Mediterranean Sea. This must have been a real sight because it is thought to have carried 1,000 times more water than the Amazon River does today.

How about you? Are there any events from the past that you would like to experience in person if you were ever presented with an opportunity to do so?

May I suggest the book “How to Invent Everything” by Ryan North. It has many ideas on things to do and see in the past.
https://www.amazon.com/How-Invent-Everything-Survival-Stranded/dp/073522014X

Hi Doug — I’ve read “How to Invent Everything” — it’s a good read and a lot of fun — it also teaches a lot about how things used to be.

I just ordered a copy. I’ve been reading “The Day The Universe Changed”, by James Burke and throughout, I keep wondering if, given a transport back in time, I would be able to invent any of the base technologies needed to jumpstart a technology revolution and,say, create electricity or build an engine, etc.

Something sounds very familiar here. I believe Glog Benson was working on the lug nut at the time. Ugg and Glog were having a spirited debate about which needed to be invented first.

I think I remember my grandparents talking about someone called Glog Benson — something about him being a shiftless fellow who didn’t bathe often enough — but I’m sure it wasn’t the same Glog Benson in your family tree.

Sounds about right, I must say.

How to Fit Watch Batteries and Adjust Watch Straps

Neither a Borrower nor a Lender Be

Once Every 50,000 Year Comet is Heading Our Way

Is This the Best Useless Machine Ever?

Turbo vs. Retro. vs. Hyper Encabulators