Antique analog meters can be used to display all sorts of useful information, but it’s rare to see one that simply says “WRONG”.

I just received an email from my chum Matt Pulzer, who is the editor and publisher of Practical Electronics, which is the UK’s premier computer, electronics, and maker hobbyist magazine. In this email, Matt spake as follows:

I can’t remember if I ever sent you a pic of my favorite (rather dusty) meter — doesn’t everyone have a favorite dusty meter?

I think it’s from an old railway signaling / points control system and is essentially binary — ON/OFF.

However, it also has a third position called ‘WRONG,’ presumably to indicate a detected system fault.

Somehow the use of the word ‘WRONG’ seems to resonate with the troubleshooting associated with every digital circuit I’ve ever built.

It’s almost as if there is an element of sarcastic condescension and tut-tutting from the meter. Its terse and somewhat unhelpful ‘WRONG’ is a wagging finger with which it says, with a deep sigh: “Try again, if you really must. The output should be ON or OFF, but you’ve managed neither; well done, you’ve achieved the WRONG output from a choice of just two possibilities. Perhaps you’d have better luck with a potential divider or LEGO.”

Funnily enough, this reminded me that somewhere here in my office I have a monster meter that was a gift from a guy called Ian who hails from Down Under — we’re talking about an antique artifact that’s about 9” in diameter presented in a cast-iron case that weights around 15 lbs. I always had it in mind to use this bodacious beauty as the centerpiece for some sort of cunning steampunk-inspired creation, but I’m drawing a blank as to what that creation could be, so any ideas you have would be very gratefully received.

PREVIOUSNEXT
Want a 100” TV Screen Without a TV?Want to Join Me in a Photorealistic VR Metaverse?
LOGIN / REGISTER
EDIT PROFILE

Since giving Max the aforementioned meter, I came across an even bigger one, but the cost of getting it to the US is prohibitive. 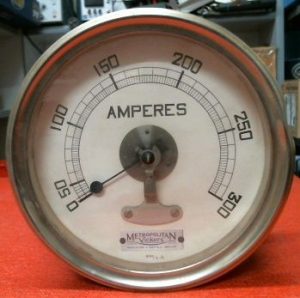 Hi Ian — it’s great to hear from you — dare I ask how big this new bodacious beauty is (and how much does it weigh)?

I’m drooling with desire, but — as you say — it would cost a fortune to ship this bodacious beauty from Down Under to the USA — it will just have to wait for me to come and pick it up 🙂

That would be an excuse to come. You could catchnup with our other friends – David Ashton springs to mind. Also he’s not too far away from the Parkes radio telescope.

There’s also another Dave who reads Practical Electronics (he calls himself the “LED Baron”) who hails from Perth — it would be AWESOME to see everyone in the real world!

Don’t forget the size of Australia!

It doesn’t look all that big on my handy-dandy pocket-sized map LOL I don;t know if thsi will ever come to pass, but there was some talk recently by a FPGA company about doing a 10-city tour of Australia — with me as one of the speakers — so you never know…

Would love to see some pictures of your office.﻿ 🙂 ﻿

There’s a short video showing some of the office in my most recent ShieldBuddy blog: https://www.clivemaxfield.com/gasp-in-awe-at-the-shieldbuddy-tc375/

I never saw a meter that said “Wrong” before, but I’ve got one in my goody box that runs a close second: 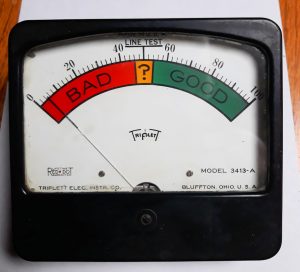 I love this — where did you get it and what was it for?

I’ve had it for a LONG time- just waiting for the perfect opportunity to use it. No telling where it came from. My guess is that it was from a “U-TEST-EM” tube tester.

Ready for a Brain-Computer Interface Implant?