In my previous blog — Don’t Mess with My Head! — I made mention of the fact that I’m currently playing with a couple of pseudo robot heads.

It’s no secret that I’m a big fan of steampunk, which is a subgenre of science fiction that incorporates retro-futuristic technology and aesthetics inspired by 19th-century industrial steam-powered machinery. Thus, although we tend to think of robots as being super-modern, I’ve tried to give my robot heads a hint of a sniff of steampunk, part of which involves my using pan-head machine screws with slotted drives.

On some of my more “industrial” looking projects, I’ve used acorn nuts to great effect. In this case, I typically use brass acorn nuts to adorn brass control panels. Other projects have used machine screws with round, dome, pan, flat, oval, and hexagonal heads as the occasion demanded. Sometimes these are brass, sometimes steel (typically zinc-coated), and sometimes they are black.

One point worth noting is that the black ones tend to be harder to find in the less popular sizes. In the past, when I was young and foolish, I spent an inordinate amount of time tracking down black versions of the machines screws I wished to use. These days, by comparison, I simply purchase cheap-and-cheerful zinc-coated steel machine screws and then use Liquid Gun Blue to turn them black.

There is, of course, a vast collection of different head shapes available, and these are accompanied by myriad types of drive, only a few of which are shown in my drawing. As I discuss in my monthly Cool Beans column in the forthcoming November 2021 issue of Practical Electronics, which is the UK’s premier electronics, computer, and maker hobbyist magazine, hexagonal heads speak for themselves. In the case of the other head profiles, I almost invariably use flat (slotted) drives, because this type has been around since time immemorial.

If the truth be told, I wouldn’t be averse to using square (Robertson) drives, which were invented by Peter L. Robertson in 1907, or Hexagonal (Allen) drives, which were invented by William G. Allen circa 1910, because both of these have a look-and-feel that pleases my eye. Although I’ve not yet done so, I might even be tempted to use Torx screws, even though these little scamps were invented by the Camcar Textron company in 1967. As unreasonable as it may sound, however, you will never find me using Phillip’s drive screws on my steampunk hobby projects because — even though they were invented by Henry F. Phillips in 1936, thereby predating Torx screws by 31 years — to me they scream “Hello there, I’m from the 20th century, what’s your name?”

As a slight aside, have you seen the offerings from the folks at Outlaw Fasteners? These little rascals have come up with a 3-tier hexagonal drive that provides up to 18 driving points, thereby delivering an extremely high torque-to-driver ratio. The nested drive removes the need for multiple drive bits, although a special Outlaw bit that employs all three tiers is preferred. As far as I can see, they offer only deck screws, but I’m sure this approach could be of interest for a wide range of applications.

Do you remember the scene from Crocodile Dundee when he famously says, “That’s not a knife… that’s a knife!” (check out this video snippet as a reminder)? Well, my chum Matt Pulzer just sent me a picture he found somewhere on the internet with the accompanying caption, “That’s not an Allen key…” (the important thing is to look at the full-size picture to see what’s in the palm of this guy’s hand).

In closing, just because I feel like it, although I’ve shared this before, it never fails to make me gasp in delight. Do you recall the theme song to the Titanic movie as sung by Celine Dion? Well, make sure your sound is turned up and then listen to the lady in this video – I am 100% confident that her performance will blow you away!

How is it the huge Allen wrench tranforms from a square on the left side to a hexagon on the other end?

I assumed it was just hammered out that way (with a big machine hammer, of course)

The Titanic lady sucks, or should I say blows.

When i used to do electrical work, and buy conduit, I would ask the sales guy, “Are you sure this conduit is good??” “Of course it is” he’d say. “Well I’ll just test it,” I would say, and blow a stentorian blast on one. “Yeah, that sounds ok,” I’d say, “I’ll take those!” I got some funny looks….

Did you get the funny looks before or after you blew your stentorian blast?

Now for my comments about the slotted and Phillips – which I have bravely spoken about on another site. The slotted head should be banned. The worst case is that electrical and swith plates have slotted screws to mount them. Really? Better yet, the slotted Phillips should be used because it supports both types. 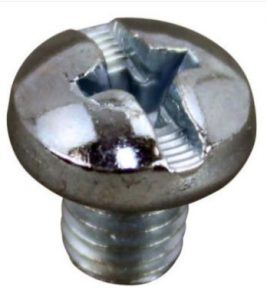 I like the slotted Philips for general-purpose use — but not for my steampunk projects.

Google “Screw heads” for more information that you could want on this topic… not only the slots but the form of the head have endless variations….

Any man (steampunk or otherwise) needs one of those fit-all bit sets like this one to be ready for whatever weird screws fate throws his way.

I also don’t like Philips heads, not for Max’s reasons, but because there are philips and posidriv which look the same but ain’t, and whichever screwdriver you have is the wrong one and ends up mangling the screw, or your screwdriver, or both.

I have a kit like that from iFixIt — I use it all the time. I don;t mind Philips or Pozidriv (which supports a higher torque) — but I agree with you that we only need one of those; having both is confusing.

I suppose EVERYBODY noticed the green Phillips and red Slotted symbols at the end of each comment with a number between them? LOL

Dang — I totally missed that — now you mention it I see the shapes but I don’t see green or red colors — am I missing something?

Torx Security (if I recall the name correctly) is Torx with an extra pin in the center to prevent the use of Torx drivers.

Maybe it’s a nefarious plot by the screwdriver manufacturers LOL