Wi-Fi, NB-IoT, Bluetooth, LoRaWAN… This webinar will help you to choose the appropriate connectivity protocol for your IoT application.

Connectivity is cool! The cornucopia of connectivity choices available to us today would make engineers gasp in awe and disbelief just a few short decades ago.

I was just pondering this point and – as usual – random thoughts started to bounce around my poor old noggin. Take the topic of interoperability, for example (for the purposes of these discussions, we will take “interoperability” to mean “the ability of computer systems or software to exchange and make use of information”).

Don’t get me started on the subject of the Endian Wars. Instead, let’s consider the 7-bit American Standard Code for Information Interchange (ASCII) that we know and love. The currently used ASCII standard of 96 printing characters and 32 control characters was first defined in 1968. For machines that supported ASCII, this greatly facilitated their ability to exchange information.

For reasons of their own, the folks at IBM decided to go their own way by developing a proprietary 8-bit code called the Extended Binary Coded Decimal Interchange Code (EBCDIC). This code was first used on the IBM 360 computer, which was presented to the market in 1964. Just for giggles and grins, IBM eventually introduced 57 different variants EBCDIC targeted at different countries (a “standard” that came in 57 different flavors!). This obviously didn’t help IBM machines in different countries to make use of each other’s files. Even worse, different types of IBM computers found difficult to talk to each other, let alone with machines from other manufacturers.

There’s an old joke that goes, “Standard are great – everyone should have one.” The problem is that almost everybody did. Sometime around late-1980 or early 1981, for example, I was working at International Computers (ICL) in Manchester, England. I recall being invited to what I was told was going to be a milestone event. This turned out to be a demonstration in which a mainframe computer was connected to a much smaller computer (akin to one of the first PCs) via a proprietary wired network. With great flourish and fanfare, the presenter created and saved a simple ASCII text file on the mainframe, then – to the amazement of all present – opened and edited the same file on the small computer.

This may sound like no big deal to the young folks of today, but it was an event of such significance at that time that journalists from the national papers came up on the train from London to witness this august occasion with their own eyes so that they could report back to the unwashed masses.

Now, of course, we have a wide variety of wired standards, from simple (short range) protocols like I2C and SPI, to sophisticated (longer range) offerings like Ethernet. And, of course, we have a cornucopia of wireless standards like Wi-Fi, NB-IoT, Bluetooth, and LoRaWAN. In some respects, this is almost an embarrassment of riches … there are so many options … how can we be expected to choose the most appropriate connectivity protocol for our IoT applications? 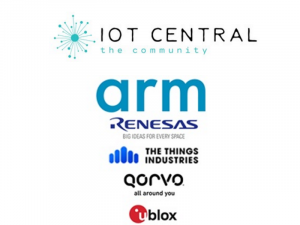 Presented by IoT Central and sponsored by ARM, yours truly will be joined in this webinar by Samuele Falconer (Principal Product Manager at u-blox), Omer Cheema (Head of the Wi-Fi Business Unit at Renesas Semiconductor), Wienke Giezeman (Co-Founder and CEO at The Things Industries), and Thomas Cuyckens (System Architect at Qorvo).

If you are at all interested in connectivity for your cunning IoT creations, then may I make so bold as to suggest you Register Now before all of the good virtual seats are taken. I’m so enthused by this event that I’m prepared to pledge on my honor that – if you fail to learn something new – I will be very surprised (I was going to say that I would return the price of your admission but, since this event is free, that would have been a tad pointless).

So, what say you? Can I dare to hope to see you there?

Looks like I missed the webinar. 🙁 Any chance that it will be available on the video section of the IoT Central web site?

Hi Elizabeth — yes, the slides and recording of the webinar will be available on IoTCentral.io tomorrow

Ready for a Brain-Computer Interface Implant?