What do you do if someone starts waving furiously at you, seemingly delighted to see you, but you fear they are being overenthusiastic?

Earlier this week, something happened that I will remember for a long time to come. It was Wednesday, which is the garbage pickup day for our area of town.

I’m usually at work when this occurs, so it’s a long time since I’ve seen it happen. On this day in question, however, I had to run home for something, passing the garbage truck on my way into the neighborhood and then leaving my car idling in the drive while I ran into the house. 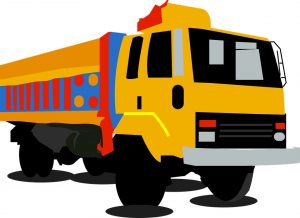 Whilst there, I mentioned the fact that the garbage truck would soon reach our cul-de-sac to my wife (Gina the Gorgeous). Gina responded by saying that something strange had been happening for the past few months.

She told me that as the garbage truck exited the cul-de-sac, its driver performed a “toot-toot-ti-toot-toot” on his horn. She further speculated that ours might be the last street on his route and he was therefore signaling his happiness at a job well done. “Well,” I thought, “that’s as good an explanation as any, I suppose.”

As fate would have it, the truck entered our cul-de-sac just as I was strolling down the drive to my car. As it approached, I gave a little wave to the driver, as you do. I wouldn’t have given this any more thought had he not waved back enthusiastically.

Since he seemed so happy to see me, I waved once again, at which point he entered a frenzy of gesticulation with gusto and abandon using both hands while also giving the most humongous grin.

I have to admit that I was somewhat puzzled by his enthusiasm, but I felt it would be churlish of me to fail respond in kind, which I did. In hindsight, I’m sure this would have presented quite a scene had there been any spectators to see it.

It was only when the truck pulled away with a cheerful “toot-toot-ti-toot-toot” on its horn and I turned to open the door to my car that I became aware of the three little girls next door (2, 5, and 6-years-old) standing on their front porch jumping up and down and waving furiously, at which point I realized the driver hadn’t been waving at me at all.

“Well, that was embarrassing,” I thought as I sheepishly got in my car and headed back to work.

I’ve had similar things happen and it IS embarrassing, but good on the driver for making the little girls’ day with his friendliness!

Our Garbos (for such do we call Garbage Men down under, with the Australian gift for abbreviation) come round at about 5 AM. The trucks usually wake me up. On one occasion as I heard the truck I realised to my horror that I had not put the bin out. I rushed out but alas was too late for his passing, All was not lost, however, he does my side of the street first and then the other side. So (clad only in my sleeping shorts on a cold morning) I wheeled my bin to the other side of the street and waited for his return. He drove up and gave me a huge grin. “Got you out of bed, did I??” Fortunately it was only one bin that day (sometimes there are up to 3). But I guess it’s a lonely job and any interaction is welcome for them.

In England when I was a little kid, they would pick up anything — also they would walk down your drive, wheel the trash can to the street, empty it, then wheel it back again. As the years went by, the service changed, you had to take your own trash can yo the kerb and they woudl accept only what was in that can. When my dad retired, he made sure he was always in our drive with a tray of glasses of ice-cold water and cookies in the summer, and hot chocolate and cookies in the winter. They used to take a 10-minute break at our house for a beather and a chat. Funnily enough, we never had any problems getting rid of anything up to the size of beds LOL

I can top that.
Several years ago I was stopped at a traffic light when a girl on the sidewalk smiled and waved at me. Thinking it was a girlfriend from several years ago I smiled and waved back. I realized my error when she approached my car and said “Hey fella- want to party?” I’ll bet the skid marks are still on that street from when I made my hasty exit. I think I ran the light.

Life is a minefield for the unwary.

Oh, to be young again.

And when you wave back at a driver, who was actually not waving at you but pulling their sun visor down….

Meet the Masters of the Mystic Arts at Microchip Technology

Meet my New Buddy — The TempBuddy!

How Much CO2 is in Your Home and Office?